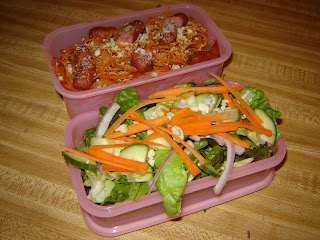 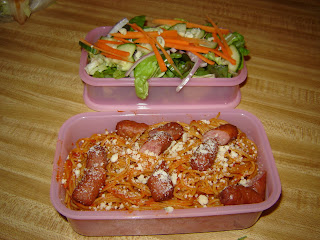 Posted by The Daily Sarah at 9:19 PM No comments:

Sometimes you wake up early 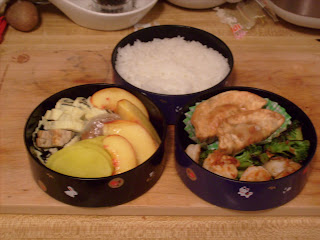 So, the day before yesterday, I woke up early. Like, three hours early. This bento was the result.

I tried to deep fry the pot stickers (having a left over pan of oil from making karaage) but it proved too hazardous. I ended up, gasp! microwaving them to completion. To be honest, the combination produced a hard and chewy shell over what was already a mediocre filling (mass produced freezer gyoza). I think I will stick with the pan frying method in the future.

The shrimp with broccoli in chili sauce is... exactly that.

The "yellow plate" as I thought of it, was sliced takuwan (pickled daikon) with tamagoyaki and peach (dipped in water laced with lemon juice to preserve color). The middle is a ball of miso which I dissolved into hot water at lunch.

Completed with white rice, this was one of the most satisfying lunches I have ever eaten.
Posted by The Daily Sarah at 10:41 AM No comments:

The Redemption in a Roll 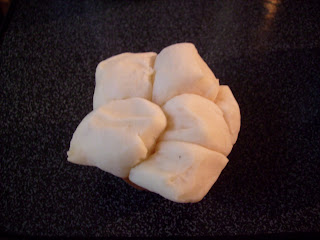 Recently I failed at making a pizza dough. We won't get into it, but excessive amounts of salt and guests being present were involved. To repair my baking reputation somewhat, I decided to bake some rolls.

After consulting this recipe, I tried my hand. It was rather cool in my apartment that day; an impetus for baking no doubt. I decided to put one of those terracotta, warming discs that you place under a basket of baked rolls under the bowl of my raising dough. This cut my rising time in half.

The dough was nicely plastic; not too sticky at all. I did not manage to cut the strips perfectly even, nor to get them to stack neatly. This is why my rolls looked a bit like a hybrid between butter flake rolls and monkey bread. Even so, I consider my baking skills redeemed from the previous fiasco.

In the end, the important part is to keep getting back on the proverbial horse and keep baking. And if they're really your friends, they'll eat that salty pizza crust anyway.
Posted by The Daily Sarah at 11:18 AM No comments:

A summer day with you

My friend Lilian and I got together and drove around a bit. We went to the Yakima Fruit Stand (the one not actually in Yakima), we poked around a bit at a farmers' market inside of a set of delightful little stores catering to Americana. We finished off by going to a grocery store, picking up little cheeses, cream (for tea) and a fresh loaf of bread. 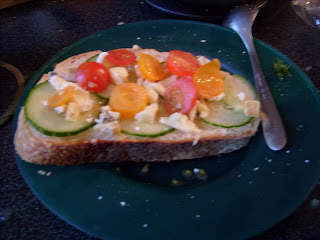 Returning to my house, we had open face sandwiches with olive oil, tiny tomatoes (from Lilian's parents' garden), thinly sliced cucumber and the aforementioned cheeses. We ate that while drinking Pakistani tea (sent from Spain by my friend Kishpike during his travels abroad) with cream and rock sugar. 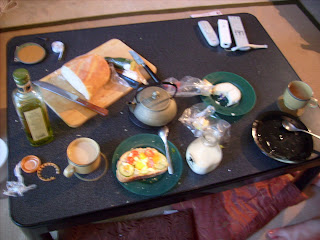 If there is a moral to this story (which there may not be) it's that I can occasionally eat some very tasty things.

Posted by The Daily Sarah at 2:05 PM No comments: 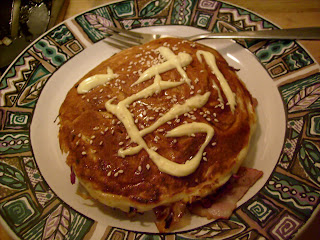 Okonomiyaki (お好み焼き) has the kanji for "like" and "heat through" (grill, fry, fire up; that kind of thing). It is as to a pancake as an omelet is to a fritata. You make a better, have cut things small, and fry it up. This dish has about a billion recipes online.

I used a cheater method and used *gasp* an instant dough mix. I just didn't know where or how to find the "mountain potato" used to make the dough have the right consistency. Perhaps it's easily found in Japanese markets, but I don't have any locally. Despite being from instant, the resulting fritter was very delicious.

The method is drawing a disc of batter onto something hot and slick (I used my favorite cast iron) and to layer your ingredients with the meat on top and covering with a lid to let it steam cook the top while frying the bottom. The two video tutorials suggested brushing the batter on top of the bacon, but this seemed bothersome (http://www.blogger.com/img/blank.gifI only have one food brush). Instead, I scooted the okonomiyaki over, drew another disc of batter, and flipped it into the new batter disc. This worked well. While it's still on the griddle, you brush okonomiyaki sauce on top.

I don't have specific okonomiyaki sauce, so I used "Bull Dog" brand "fruit and vegetable sauce, medium sweetness". It's kind of like a Japanese barbeque sauce. Once I plated it, I tried to make an attractive pattern with squeezes of mayonnaise and sprinkled it with sesame seeds.

I wouldn't say that I'm up to "Okonomiyaki no Ucchan"'s standards, but I make a mean okonomiyaki.
Posted by The Daily Sarah at 8:18 PM No comments:

The Queen of Hearts

probably didn't use salmon berries to make her tarts. More's the pity.

My friend Lilian, my new friend Irene and her mother (whose name escapes me) were kind enough to let me tag along with their berry picking expedition. We were after huckleberries, but we found a lot more salmon berries. 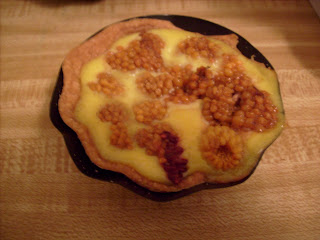 Salmon berries, for those of you thinking of extremely gross things right now, are simply called "salmon" berries because they are approximately the same color and are in season the same time as the fish. Worry not, gentle readers, my tarts are vegetarian. 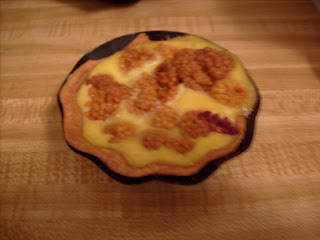 I cheated and used a store bought pie dough that had been lying in my freezer. I lined tart pans and blind baked them until they were more or less done. Then I prepared a simple custard of six egg yolks and six tsp sugar (2 TB for the measure savvy) with a pint of whole milk with a split vanilla bean. I initially used the double boiler method, but I just couldn't get the custard to stand firm. So I settled for baking it in the cups like a Hong Kong tart. I scattered the salmon berries over the surface before baking (with extra sugar and a little bit of salt).

All in all I was pleased by the result. The slight ...well tartness of the berries with the creamy sweetness of the custard paired extremely well. I'll have to make some black tea to go with them.
Posted by The Daily Sarah at 12:14 PM 1 comment: 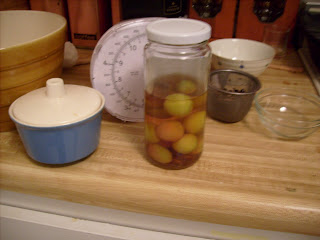 Ume are in season now. Ume are called Japanese plums, though I've heard that they are more closely related to apricots than actual plums.

In any case, these plums were meant for preserving, so that's just what I'll do. 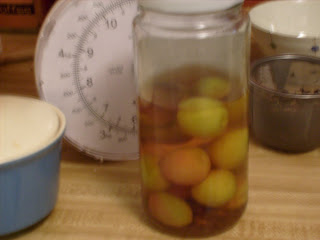 Of course, the easiest way to preserve something is to submerge it in high proof alcohol and leave it there.

Umeshuu (plum liquor) is traditionally made with shouchuu, but I live in an area with a dense Korean population and thought that soju would make a poor substitute. I opted instead to use some vodka that was lying around my house.

The recipe I had called for a two to one ratio of plums to rock sugar (I used German rock sugar because it was what was handy). Then you fill your container enough just to cover the plums, making sure to leave half the bottle space empty. Why? Because the plums give up their liquid and will eventually explode a fully filled bottle.

Leave this in a DCP (dark, cool place) for three months, take out the plums (which I hear are a real treat) and return to its DCP for one to three years. 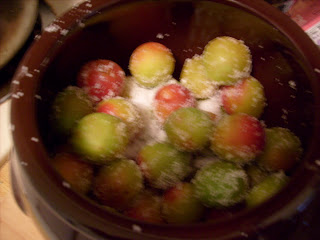 Now for the tricky part. If you have any interest in Japan at all (which you might not) then you are at least familiar with the sight, if not the name umeboshi. Umeboshi is that red, sour ball in your rice ball. It is the quintessential Japanese pickle. 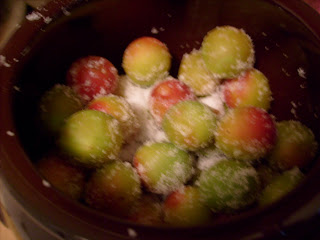 You see, I am one of those people who is bad at waiting. Instant gratification more often than not is the biggest factor in my decisions.

So pickling? Better damn well be worth it. This is a project that will take roughly three months for the first stage, and up to three years for second.

I carefully hand selected the unblemished plums (the blemished ones went into the vodka) and carefully used a tooth pick to... pick out the stems. Then I washed them in several changes of water, making sure not to bruise them. I left them soaking over night to remove some of the bitterness, then dunked them in more vodka (I'm serious running out guys) and prepared a ceramic container by wiping it down with, you guessed it, vodka. I then weighed out around fifteen percent of the weight of the plums in course salt and layered it with the plums into my sterilized container. I put a weight (a duck taped plastic container full of water into a plastic sandwich bag) and will now wait for two weeks for the umesuu (plum vinegar) to ooze out.

As soon as my akashiso is big, I'm supposed to tear it into little bits and add it to the mix as well.

Wish me luck because I think I'm going to need it. 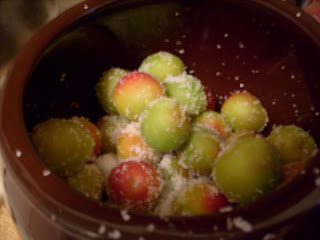 The Daily Sarah
I am a 20 something woman trying to get my life straight, one day at a time.